Networking is not what you think

If you haven't been networking in the last decade, you might well have an idea about networking that is far from the truth. So today I wanted to discuss what networking is and what it could mean for you and your business. Six years ago, I joined a networking group called Mums Unlimited. Funnily enough, it was for mums who ran businesses. It’s run by Debbie Gilbert, who is an amazing woman and a very successful mumprenuer. When she opened the meeting in Northampton I was there however, that wasn't when I discovered the power of networking.

How I discovered the power of networking

It was three months ago, when locked down came into effect. I received an email from Debbie to let me know that they were doing a free online zoom meeting. I hadn't been to a meeting in years and I was intrigued to see if there were any familiar faces. As I was about to launch my new business, the Society of Professional Wedding Vendors, I thought networking might be a good thing to do. 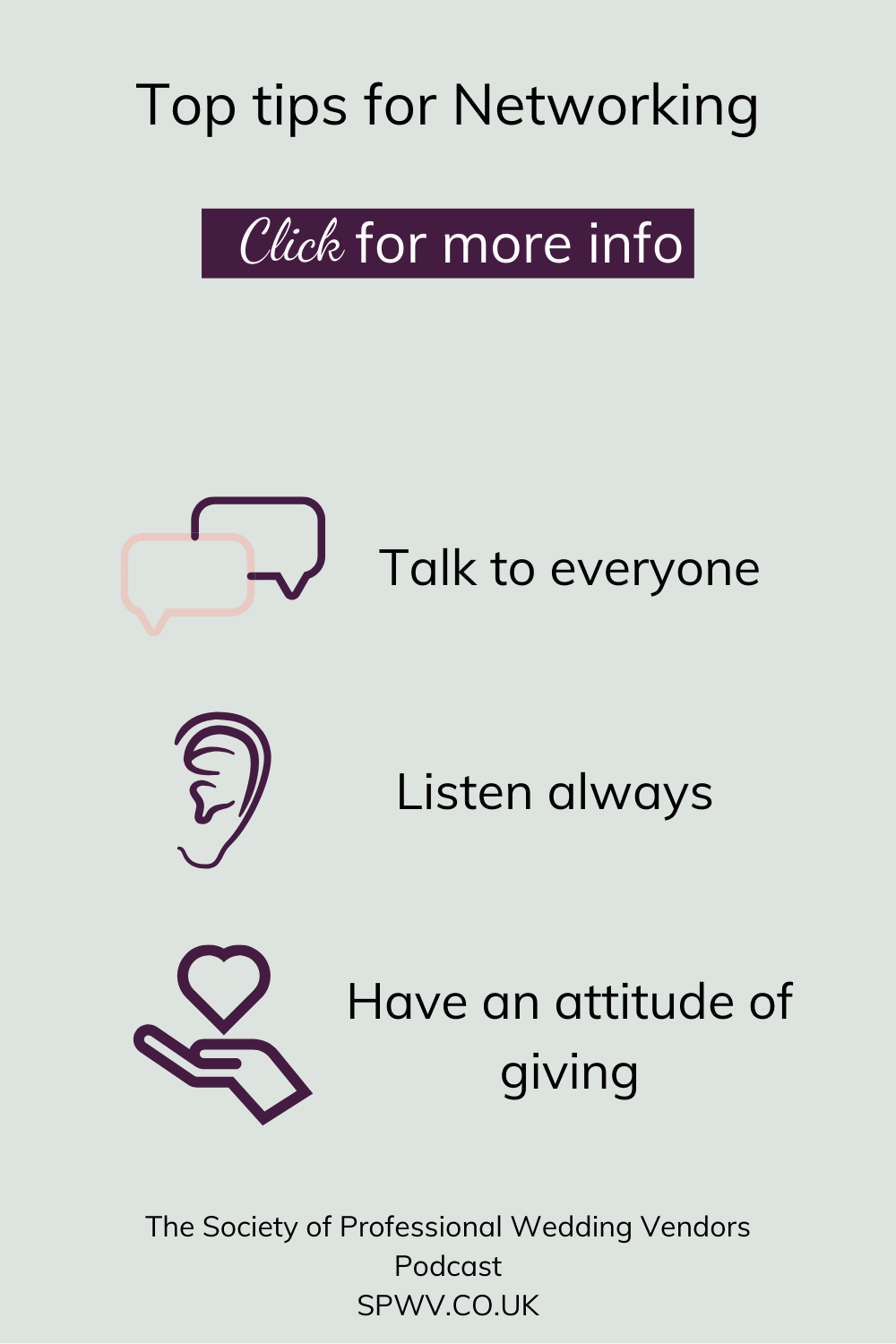 So here are my top tips for networking and getting the most out of it.

#1 - Firstly, talk to everyone. This is my top networking tip because you seriously never know who someone else knows. Just because they might not seem like your ideal client doesn't mean that they don't know people who would be.

#2 - The second tip is to listen, you might hear what someone else does and think that's not for me, but don't switch off. Think about your network and who you might know that might find that person's offering useful or interesting.

#3 - My third tip is to go in with an attitude of giving, give more than you take.

#4 - And finally, networking does not have to only happen at specified networking groups. You can network with everyone all the time. You can connect with somebody on social media and take it off social and ask for a one to one call to talk about how you might be able to help each other.

Make this a block on your calendar. Give it space every week. Networking pays dividends in so many ways. As I say, I have gained friends, advice, bought products and services, supported, promoted and gotten to know a great bunch of ladies. I've been able to take those skills into other groups too, which led me to find a fantastic lady who worked with me on my new branding for the society.

We are 15 episodes in and I am so grateful for you all for listening. I would be so appreciative if you would share this  with any wedding vendors, you know.

Don’t forget the doors open to the Society of Professional Wedding Vendors Membership on the 27th of July click the link below to register for one of out LIVE talks.

060 Social media and the IOS update with Caz Wilson

059 Evolve your Brand with Marie Louise